I still giggle internally like a preteen at the number 69.

Ok. Enough of that.

Parenting was hard today, but I feel like I was productive. I finished packing all my stuff from my sister’s place, with small children literally ripping the curtains down around me. Also bought more stuff for the new place. I’m hoping it wasn’t a wasted investment. A took the new toaster in its box and chucked it down the aisle at Wal-Mart because she didn’t like where it was placed in the cart. And also because I picked a brown trash can instead of the red. Sigh.

Last night was fascinating. I went to a record release thing for a local band, and there was a variety show beforehand. Some of the acts I wasn’t into, and some were funny, and one I’m still questioning my sanity a little on.

My absolute favorite was a guided meditation. Well, it started as one. We all sit on the floor, with a guy in front of a curtain on a stool with a microphone telling us to close our eyes and deep breaths. Then the voice changed, and after a while of this we were told to open our eyes…and there was a plant sitting on the stool where the guy had been.

I shit you not. 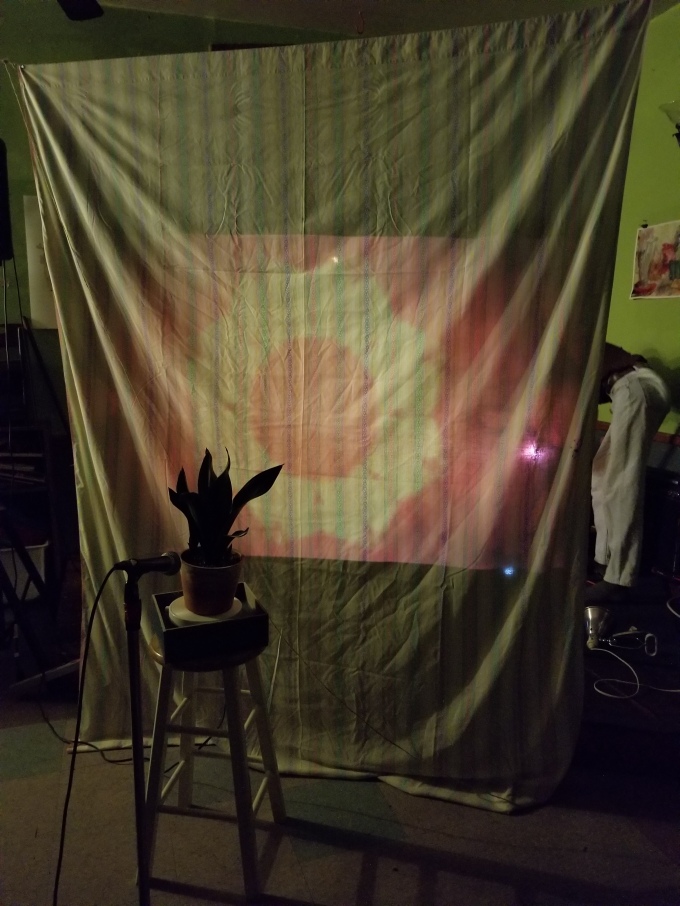 The screen had some psychedelic stuff on it. There was a voice telling us we needed soil and water, then a guy in a gillie suit came out and sprayed us with water. The voice told us to go do it’s bidding.

I about died. One of the funniest and most awesome experiences ever. I’m thoroughly impressed by the person who put it on.

1. Half the move completed. My dad and my sister helped and getting the stuff in went smoothly.

2. A has a new favorite song, Clearest Blue, by Chvrches. I think that’s great. I was ready for a change from Taylor Swift and Justin Timberlake, or “Branch” as he is known in our house.

3. The cat survived. Sister hasn’t noticed her chewed computer cable yet. He is safely ensconced in the new apartment and I feel confident that when it is discovered that I will be able to diffuse the situation.

4. A mixed positive. I accidentally left my sister’s home unsecure when I moved the last thing from her place. And by unsecure, I mean I left the front door wide open. While she was at work. I found this out when she called me after the police called her after they were called to her house a good 8 hours after I left. Thank God, it appears only a few dvds were stolen. Nothing of significant value. So, while it could have been bad it was good that nothing was taken.

5. An air mattress to sleep on. I was loaned a couple by a friend, and I almost said no when it was offered  but I am so grateful and happy I took up the offer because one, the carpets need to be cleaned SO bad and even without that sleeping on the floor isn’t the best thing ever. I woke up happy and well rested and ready for the second half of moving which will commence in just a few hours.